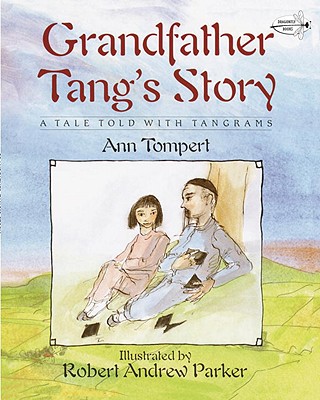 This folktale told using ancient Chinese puzzles and watercolor illustrations has been beloved for over twenty-five years and is the perfect addition to your Father's Day reading list When Little Soo asks for a story, Grandfather Tang arranges the tangram pieces and two magic fox fairies spring to life. The foxes change shapes as quick as a wink, from rabbits to dogs to squirrels and geese. But their game turns dangerous when a hunter raises his bow. . . . Originally published in 1990, Grandfather Tang's Story will continue to delight new readers as the wonder of the tangram puzzle--and an endearing game between a grandfather and his granddaughter--reveals a story of magic, clever animals, and, ultimately, true friendship. An NCSS-CBC Notable Children's Trade Book in the Field of Social Studies An NCTE Notable Children's Trade Book in the Language Arts "Ingenious." --The Bulletin of the Center for Children's Books


Ann Tompert is an award-winning children’s book author who has written more than 20 books, including Harry’s Hats, Just a Little Bit, and Little Fox Goes to the End of the World. Prior to beginning her writing career, she was a first-grade teacher for 20 years. Tompert lives in Port Huron, Michigan, with her husband. Robert A. Parker has illustrated numerous acclaimed books for children, including the Caldecott Honor Book Pop CornandMa Goodness by Edna Mitchell Preston, the Boston Globe-Horn Book Award winner Cold Feet by Cynthia DeFelice, and Action Jackson by Jan Greenberg and Sandra Jordan, which received six starred reviews and was named a Robert F. Sibert Honor Book. Mr. Parker is a jazz musician. He lives in West Cornwall, Connecticut.